MOS-LAB 1006 contains a four-input mixer, a voltage controlled low-pass filter, plus a voltage controlled amplifier with associated circuitry. A resonance or ”peaked” response at the cutoff frequency of the low-pass filter may be obtained if so desired. This is useful for creating certain types of formants, such as ”wa-wa” or ”yeow” effects.
The voltage controlled amplifier may be operated in one of two selectable modes. The exponential mode has a control transfer function of 10 dB per virtual volt. The linear mode has a control function, so Vout goes from silence with the amplifier gain in the extreme counter-clockwise position to Vin with the amplifier gain in the extreme clockwise position.
The range of the voltage controlled amplifiers is over 100 dB, which permits the VCA to be used as a squelch gate control device. By proper adjustment of controls no discernible output should be obtained in the absense of control voltages, even when the audio inputs are operated at maximum levels.

A single output is in the lower right corner of the module. This is the result after the four audio signals are mixed, sent through first the filter section and then the amplifier both controlled by control signals and manual control by adjusting the knobs. 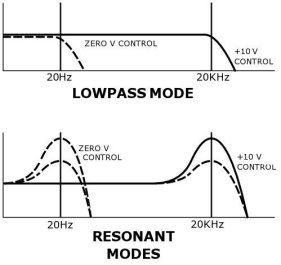